History of the Church

The First Baptist Church of Fairport can be traced back to 1816. Early meetings were held in homes and the Joy Schoolhouse on Macedon Center Road. In 1842 the "First Baptist Church and Society of Perinton" was incorporated with 28 members. Rev. Franklin Woodward, the first pastor, purchased property at the corner of Main and Church Street which for many years was the only four corners in the village of Fairport. He then sold a portion to the church trustees and the first church was built.

After out growing the sanctuary with a membership of 287 the current building was constructed in 1876 at a cost of $35,000.

The church is built in the shape of a cross being 90 ft long, 45 ft wide and 15 ft for each side transept.

The sanctuary woodwork is oiled chestnut. The original lighting was from three gas chandeliers, located down the center isle, and later wired with electricity in 1903. New lanterns and spotlights were installed in 1949.

The baptistery in its original design was 30 ft long with sloping approaches like a riverbank. It held seven ton of water. A replacement aluminum tank with steps on each side holds only four ton of water.

The original pews are still being used in the church. They are slightly curved to correspond with the original circular chancel. At one time, church members purchased or rented their pews and numbers were assigned. The original number plates of "Sheffield Silverplate" are still installed.

The bell tower is 13 ft square and is eighty feet tall. The spire rises to a total of 184 ft above street level. It has been frequently hit by lightning with the latest damage being done in 1962. The spire leans slightly to the east due to the prevailing westerly winds. The original bell cracked shortly after being installed. It was removed in 1889 and sent to "McShaw Bell Foundry" in Baltimore, melted down and recast into the 1506 lb. bell, which is still being used today.

The interior of the building contains two primary floor levels. The first floor contains classrooms and meeting rooms. Most of the second floor is in keeping with churches in the Norwich, NY, area. The DeLands and Parces were from that area.

Past and Present Organ An organ was installed in 1881 at a cost of $2500. In 1994 the organ was completely rebuilt and repaired at a cost of $108,500. The organ is valued at over $238,000. The organ contains 1072 pipes, the console houses three keyboards and a pedal keyboard. The switching system that receives the signal from the keyboard and sends it to the pipes contains 3000 keys, relays and switches and contacts. 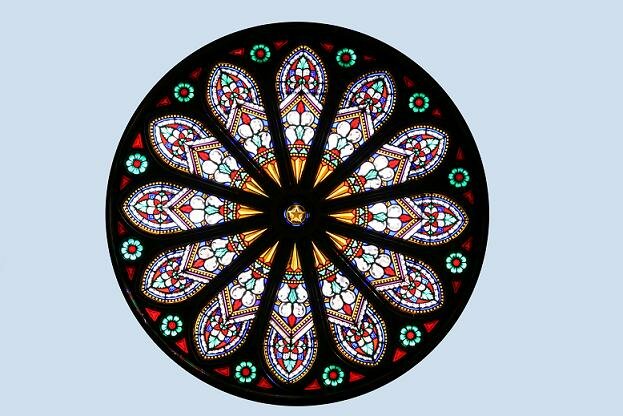 All 72 of the stain glass windows are original and many are memorials to our former leaders. The panels at the top of each window depict biblical symbols. The eastern rose window is dedicated to Daniel B. DeLand who died four years prior to the construction of the church.

The Deland Christian Center, formerly the Hupp Ford automobile sales and service dealership, can be found next to the church. Purchased in 1963, it was converted into the present day multi-purpose room - complete with full kitchen, dining-meeting hall and parlor.  It was named for the DeLand family, who were active in the church and community. Its intended purpose was to serve the ministry of the church and the community as a whole.